Every summer, I can’t tell you how much I miss Jay’s Shave Ice.  Jay’s Shave Ice was a shave ice (not shaved ice) place that was a legend in it’s time.  The flavors were carefully selected and the ice was a fine as the driven snow.  Probably more than that.  It was so good that when Jen and I went to Hawaii for our honeymoon and I tried real authentic Hawaiian shave ice on Maui and Oahu, at every stand and market I could find there was not one that held a candle to Jay’s.  I’m completely serious.  St. Thomas Aquinas once wrote “art is the right making of a thing to be made.”  Jay’s Shave Ice was art in a cup.

While he built a steady and loyal fanbase, through not just shave ice that decimated any of the local competition (I didn’t visit Sno-Asis for probably 15 years), but live music and free wi-fi Jay also started expanding his offerings to include Filipino Halo-Halo and gourmet coffee.  It must’ve been when I was in grad school, or maybe even after I moved to California that I heard Jay opened up shop in the Towson library.  Through the years, like a Shaolin monk Jay honed and refined his craft and is now one of the premiere authorities on coffee anywhere, with Spro.  As an avid Yelp! reader, I have also read in awe not only how Jay would reply to the comments posted to Spro, but how articulate he was with their precision, and specifications to how they crafted their coffee.  And honestly, as a frequent coffee drinker in the hospital, but veritable illiterate when it comes to the coffee world (I am even very awkward at Starbucks, and notice I haven’t even touched the word barista) I was hesitant to go in.  Jay is a great, personable and funny guy but I was afraid of being the ignorant fool that comes to that comic book shop in the Simpson’s.

In any case, I finally made the trek down and I’m so glad I did.  The guy at the counter was patient and answered my questions, and since I responded only with blank looks as he explained everything we mutually agreed on a cup of their house blend.  And since I am also a piggy I bought a piece of coffee cake because I always thought it was a good pair, coffee and coffee cake. 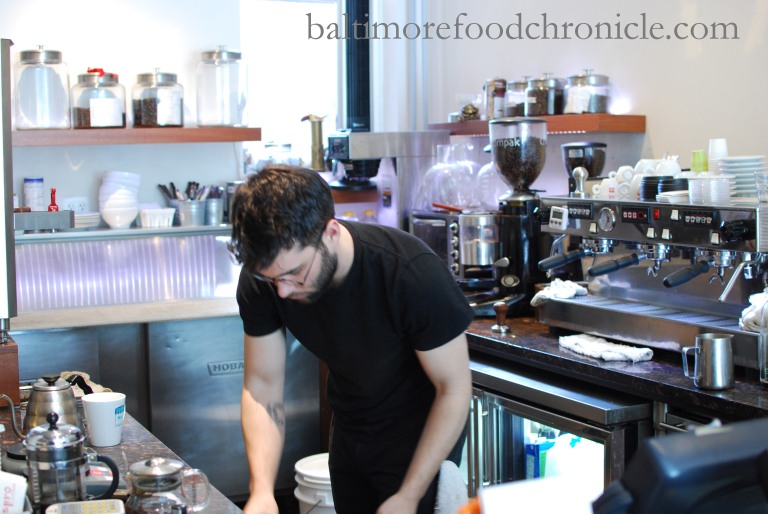 One thing that a good friend of mine told me (and Jay please correct me if this is wrong), is that coffee is only bitter when the grounds burn, and so the bitterness is the burn.  And immediately what I noticed was a surprising smoothness and lack of bitterness to my sips.  The cup was also literally filled to the brim and I did not understand how the guy brought it to my table without spilling it.  I couldn’t even take a picture without it spilling over, which is why it is not just up to the lip that I would have preferred to capture it as.  The cake was awesome, and as predicted a very good compliment.  Spro also offers other treats such as French macaroons, as well as other supplies for serious coffee connoisseurs.  But for both the well educated in coffee, as well as the casual tourist like myself, Jay once again has created art in a cup.